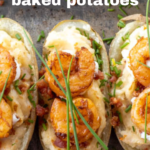 Loaded Shrimp Baked Potatoes are packed with flavor, easy to make, and look impressive. Serve them as a delicious side dish or the main course. Think of them as a potato skin stuffed with shrimp mashed potatoes finished with your favorite loaded baked potato toppings. Now go make some! They are so good! 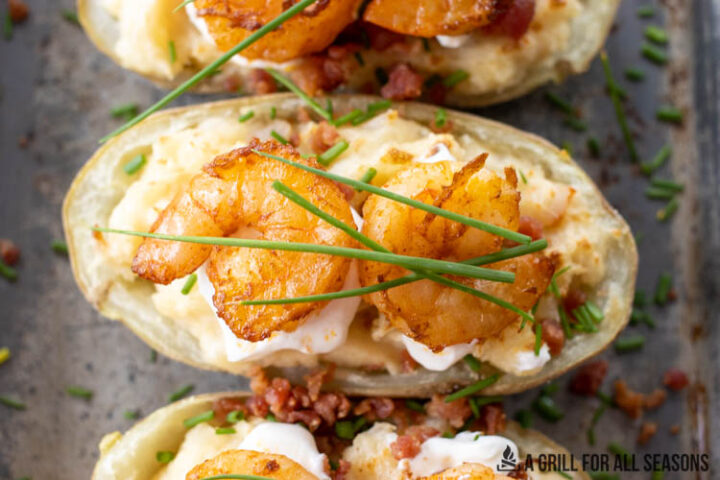 When I mentioned my idea for this recipe to Taryn she thought I was a little crazy. Shrimp and potatoes? Not a super common combination but if you've even had lobster mashed potatoes at a nice steakhouse you can imagine it.

Once we got into the kitchen and started testing this recipe she was completely won over. And so were our guests. These tasted even more amazing than they look. 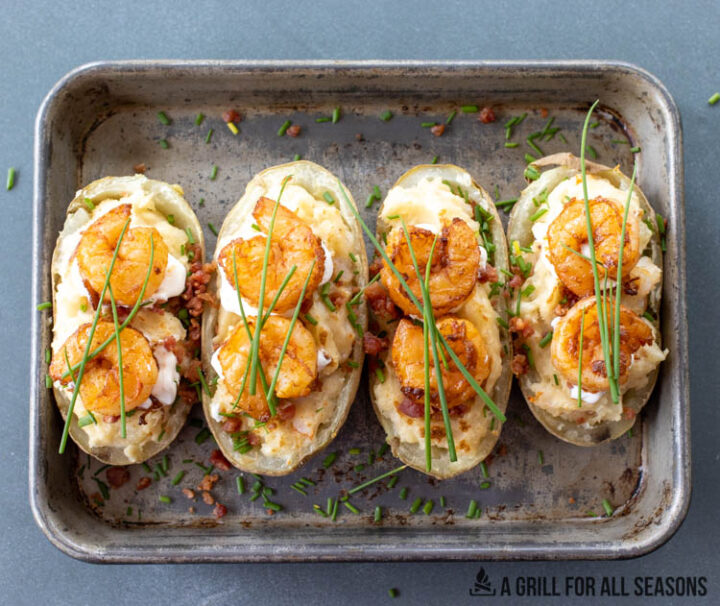 Potatoes: I like to use russet potatoes for twice-baked or stuffed potatoes. The potato shells hold up well for creating a potato skin that is easy to fill and sit flat to keep from rolling over.

Shrimp: Shrimp are a delicious protein that are easy to prepare and cook quickly. You can use any size you want. I use some of the shrimp to chop up and put into the mashed potatoes, I will reserve a few whole shrimp to place atop the finished potato. It creates a nice presentation. You could also use smoked shrimp.

Twice Baked Potato Filling: We will create a stuffing similar to mashed potatoes using shrimp, garlic powder, half and half, butter, sour cream, and salt. 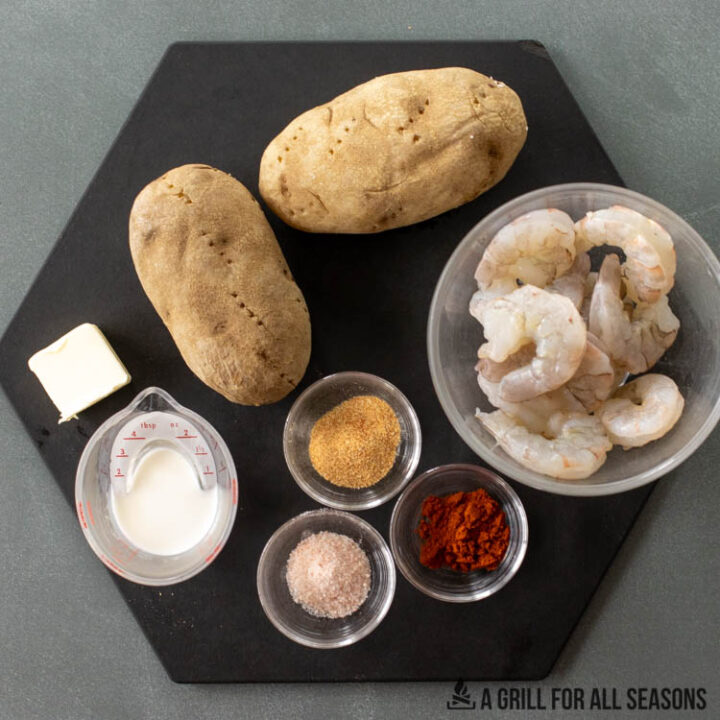 Step One: Bake potatoes. Start by rinsing your potatoes off. Then poke holes in them with a fork. This allows any steam that gets created during cooking to safely escape the potato. If I am cooking them in the oven, I will wrap them in aluminum foil. This will take about 90 minutes at 375°F.

Alternatively, make smoked baked potatoes by cooking them on the smoker at 250°F, it will take about three hours.

Finally, you can also cook in the microwave for about 10 minutes. DO NOT USE foil in the microwave. Instead, place a paper towel under and on top of the pierced potatoes.

Expert Tip: You are looking for the potato's internal temperature to get to 205°F. This is how you know that a baked potato is perfectly done. 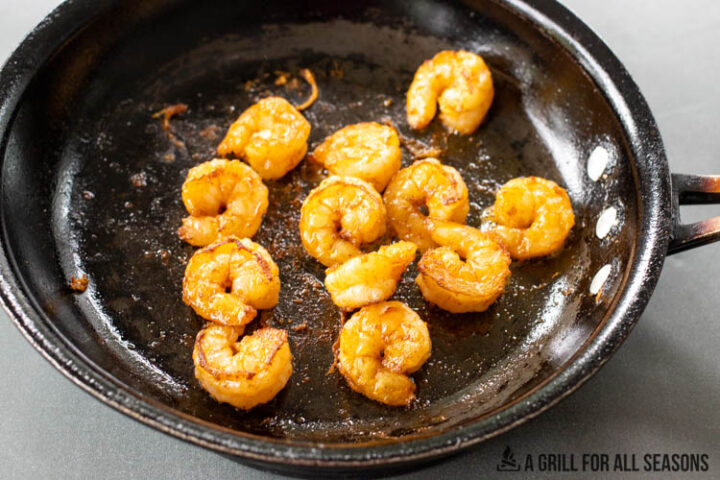 Step Two: While the potatoes are cooking, prepare your shrimp. Peel and devein the shrimp. Dry them off on a paper towel.

Place them in a small bowl and season them with garlic powder, salt, and smoked paprika. Place a skillet on the stove and set to medium heat.

Once the pan is hot, drizzle a little olive oil and cook the shrimp sauteeing them in the pan. They will only take about four minutes.

Once the flesh turns white, the shrimp is done. Overcooking shrimp will result in a chewy rubbery texture. Once the shrimp are cooked, allow them to rest on a cutting board. 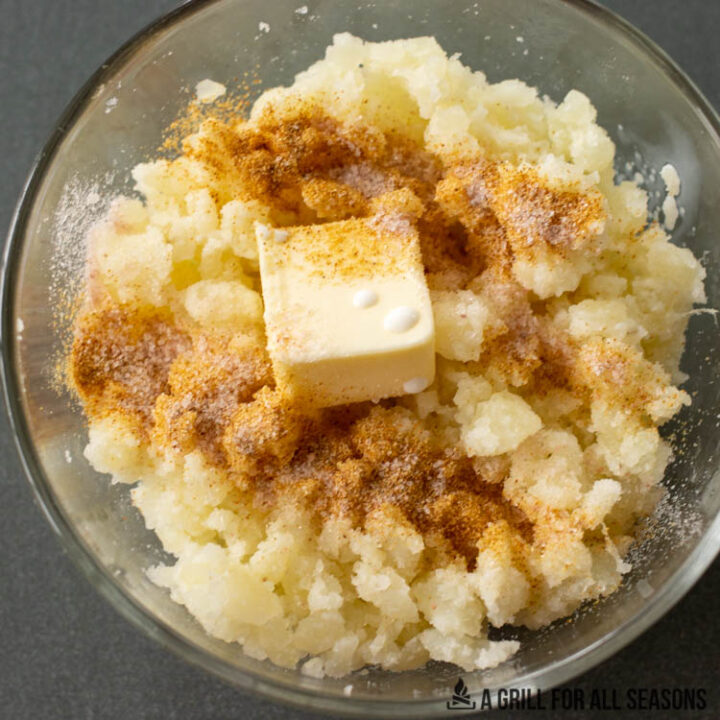 Step Three: When the potatoes are done, remove them from the oven. Take the foil off. Be careful handling these potatoes, they will be very hot.

Using a sharp knife, carefully slice them in half. Then with a spoon, scoop out the flesh of the potato and place the insides into a large bowl. Place the potato skin onto a baking sheet. 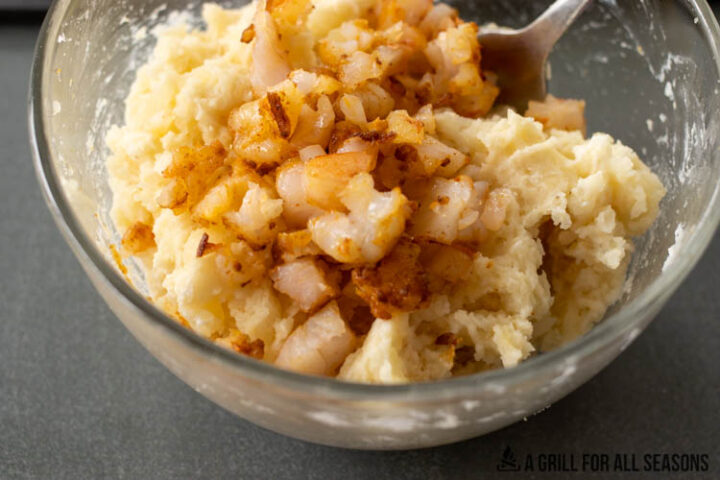 Step Four: Into the bowl with the potato flesh add half and half, butter, sour cream, salt, and garlic powder. Mix well, you can also use a potato masher to ensure the mixture is well incorporated.

Next, set aside one or two shrimp per potato skin to be used as a topping. Take the remaining shrimp and roughly chop them. Add the chopped shrimp to the potato mixture. Finish seasoning to taste. 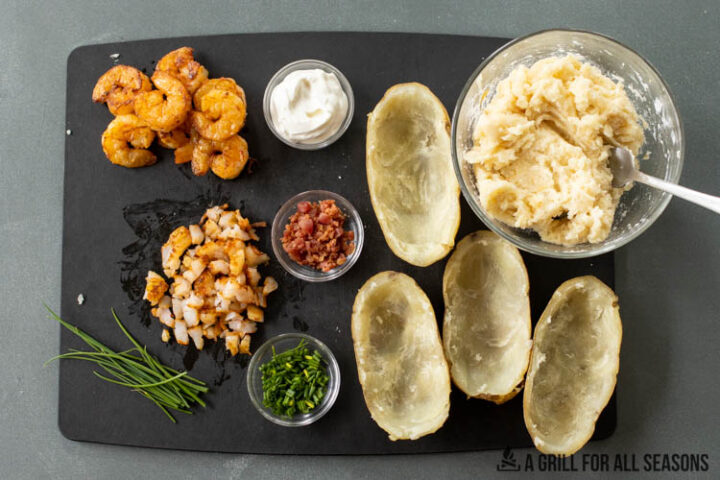 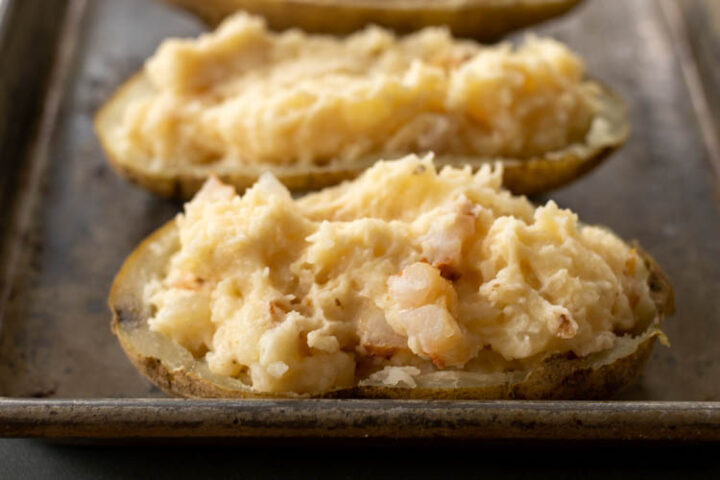 It will be slightly rounded over the top of the potato skins. Set your oven to broil and slide the baking sheet with the potato boats under the broiler for about three minutes or until the top is slightly browned. 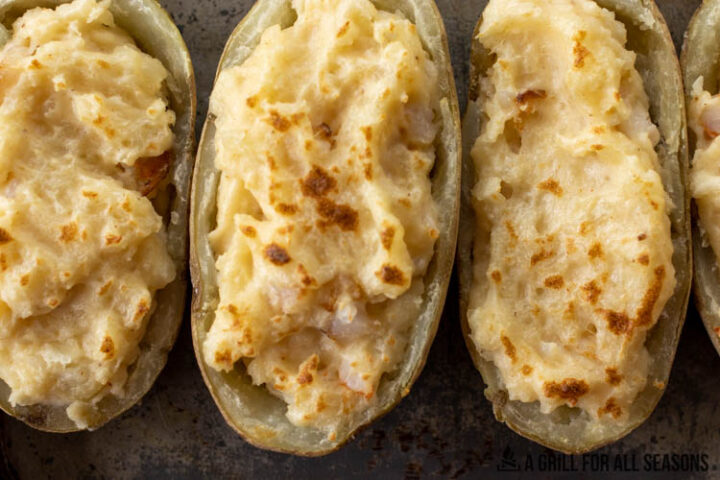 Step Six: Finish assembling the loaded potatoes. We put a couple of dollops of sour cream, then chopped chives and bacon, places two cooked shrimp on top, and then a couple of bigger pieces of chive as garnish. Serve immediately. 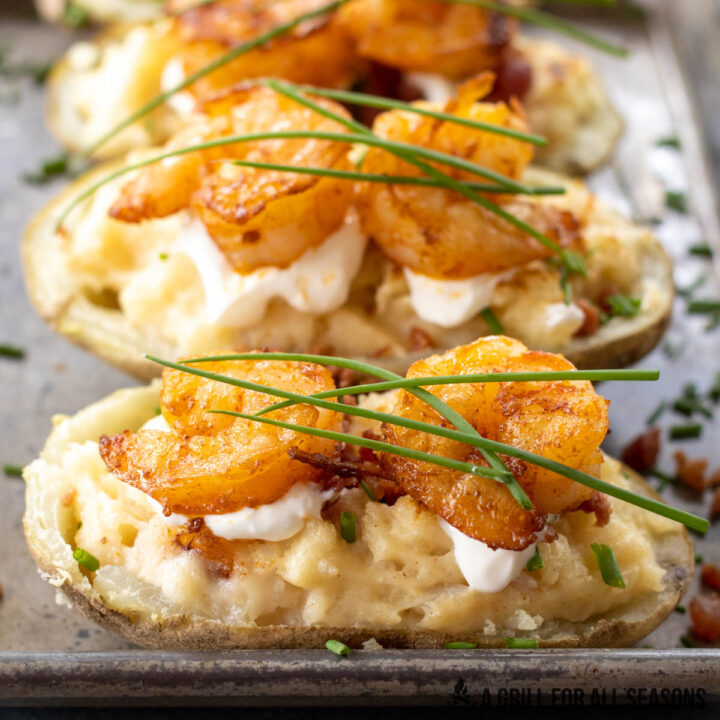 Protein - Don't have shrimp? You can stay with the seafood theme and use lobster, or maybe go down the bbq road and add smoked brisket, pulled beef, or pulled pork in place of the shrimp.

Leftover Potatoes - You can also make this if you have baked potato leftovers. Simply scoop out the potato flesh and put it into a microwave-safe bowl. Place the empty potato skins on a baking sheet. Put the bowl of potatoes into the microwave and heat for about two to three minutes. You want them hot enough to be able to melt butter and warm the ingredients you are adding. Then follow the directions from Step Four. 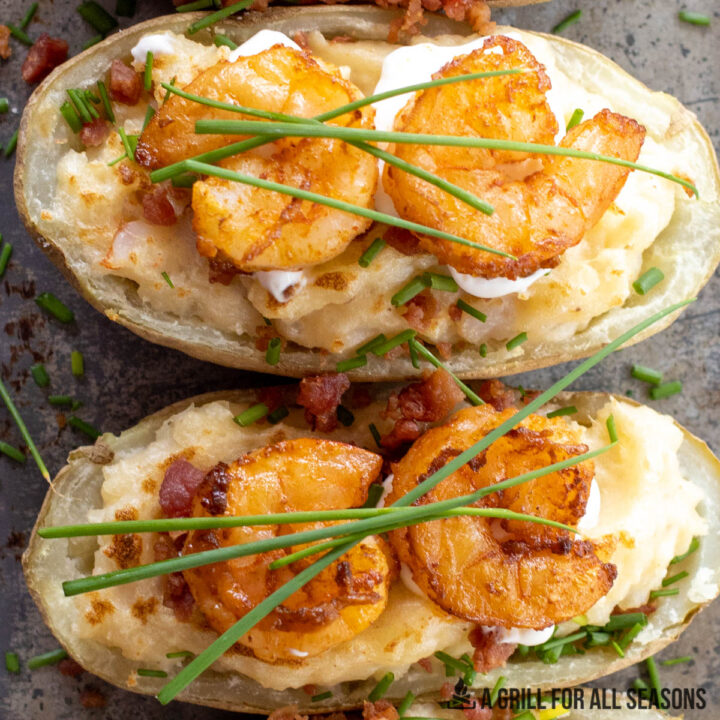 What to Serve with Loaded Shrimp Baked Potatoes 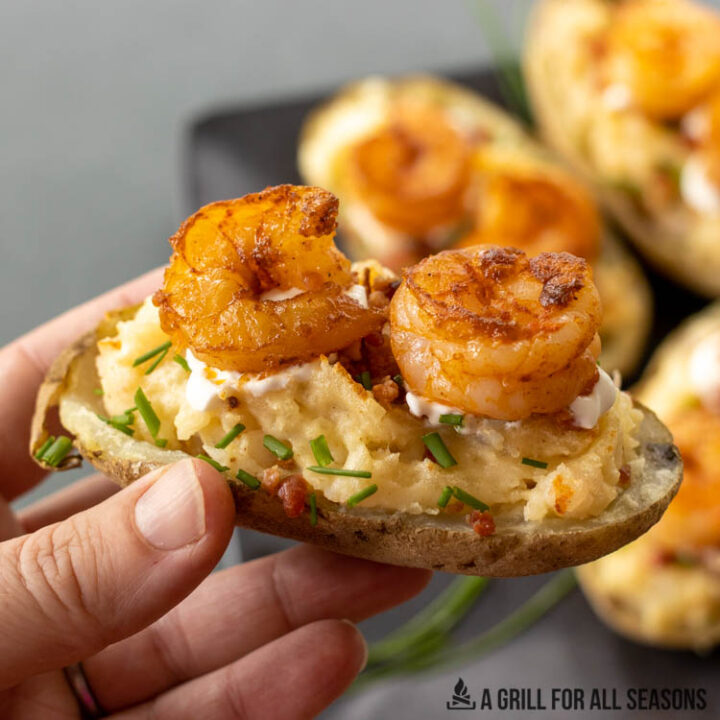 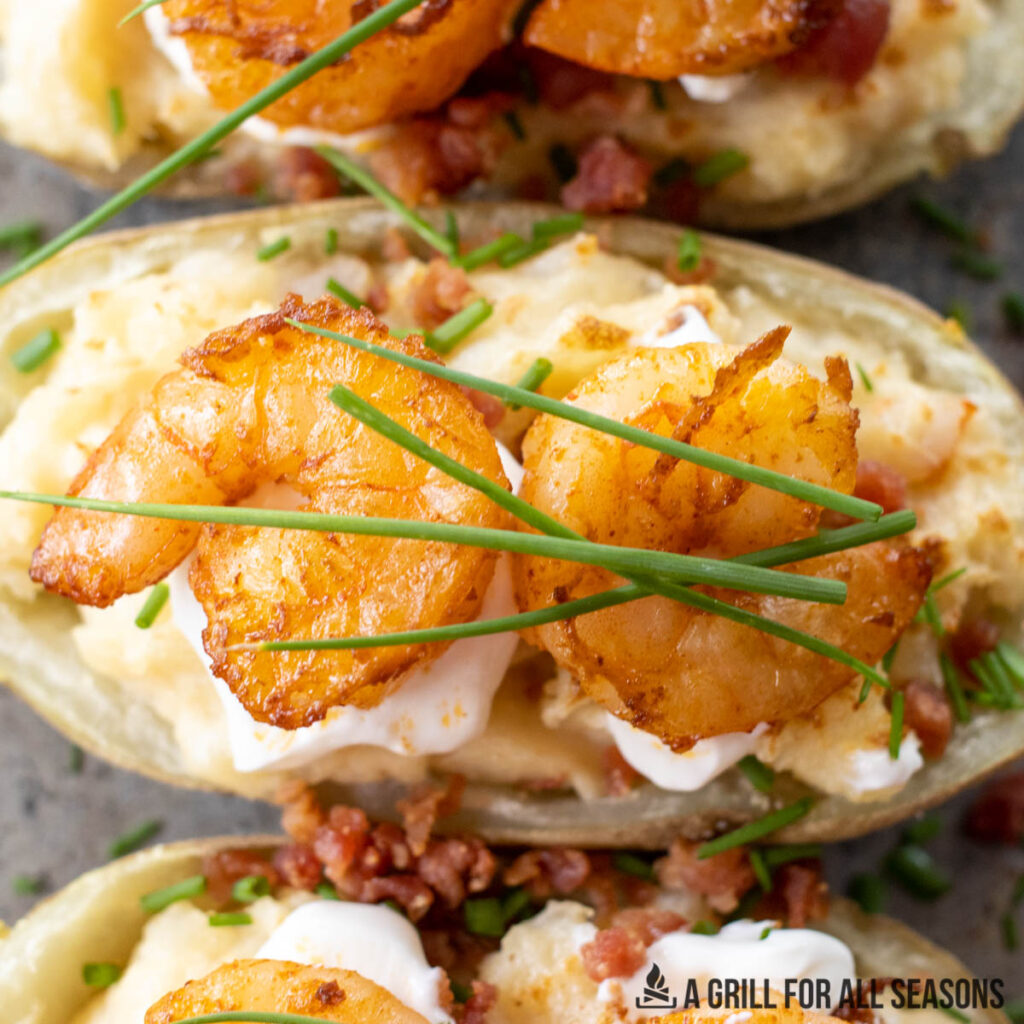 Instructions for cooking and stuffing the potatoes

Instructions for cooking the Shrimp

Instant Pot Baked Potatoes - To shorten the cooking time cook the potatoes in the Instant Pot for 15 minutes at high pressure. Place them on the rack with one cup of water in the bottom. Let the pressure release naturally for 5 minutes and then quick release. Even with time to come up to and release the pressure, this cuts the 90 minutes down to about 45. 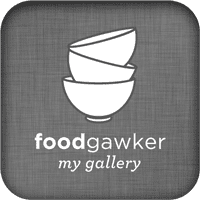