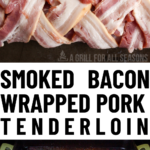 Smoked Bacon Wrapped Pork Tenderloin is a perfect way to cook a pork tenderloin. The smoky bacon takes a simple cut of meat and kicks it up a whole bunch of notches. It only takes two ingredients and less than an hour to rustle up this full-flavored pork tenderloin. 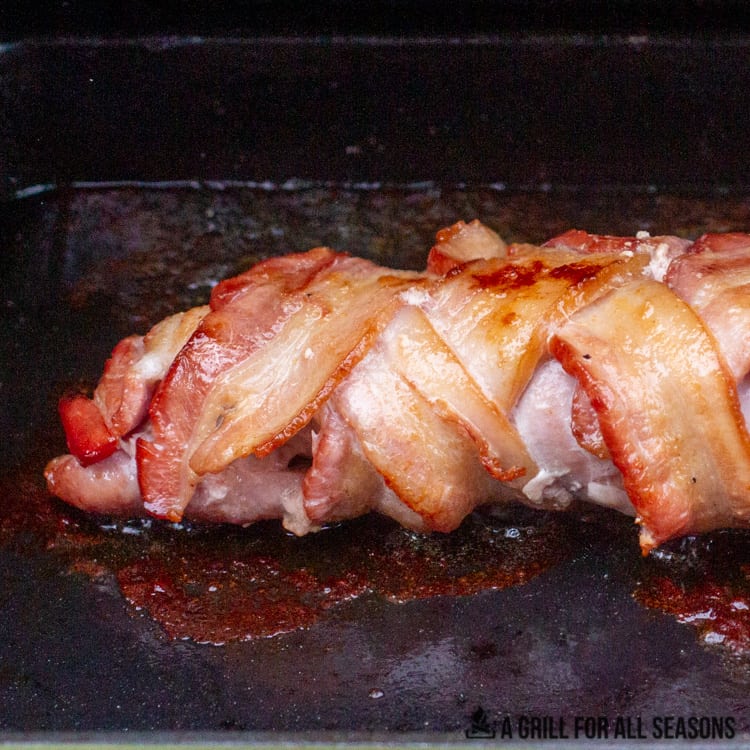 Most people will agree, bacon makes everything better.  We see bacon on everything from Traeger burgers and salads to scallops and donuts. Everyone loves the taste of bacon. But when we cook with it, there are other elements that the bacon assists with outside of flavor alone. When we roast or smoke food, we subject the food to a lot of heat over a long period of time. Depending on what we are cooking, the cooking time might be longer and we risk drying it out. One way to avoid this is to baste or spray the items as it cooks to help alleviate the potential of drying out. Bacon helps solve this problem. 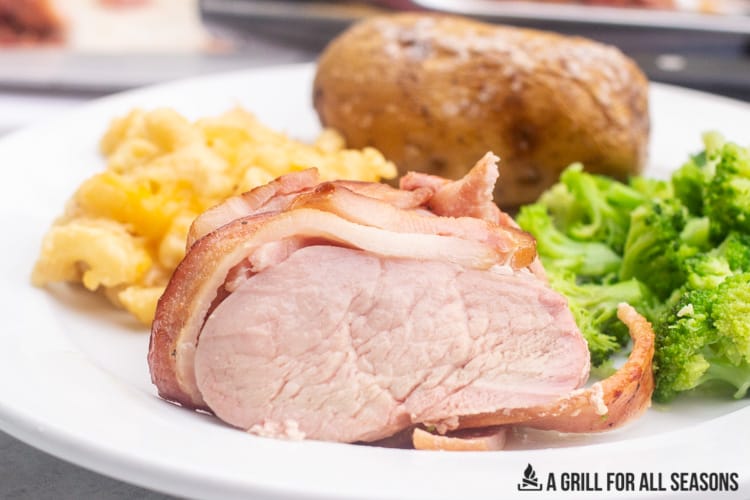 Everyone who has a smoker knows that you want to open it as little as possible when you are cooking. Remote thermometer probes and temperature gauges exist to limit the amount of time we need to open the smoker. Every time you open it you lose heat and smoke and it takes time to build it up again. Having to open the smoker to baste or spritz your meat creates a problem. Bacon helps solve this problem as well.

Wrapping your meat in bacon, whether it be meatloaf, a turkey, or a pork roast, is a great solution. As the meat smokes, the heat slowly melts the fat from the bacon and it constantly bastes your meat. The smoke flavor still permeates through the bacon and creates a flavorful smoke ring on your meat. The bacon fat gently bastes the meat and as it cooks, the bacon cooks and the fat gets rendered. It not only saves you from having to open and shut your smoker several times to baste and spray, but it also keeps the meat moist and adds a ton of flavor. 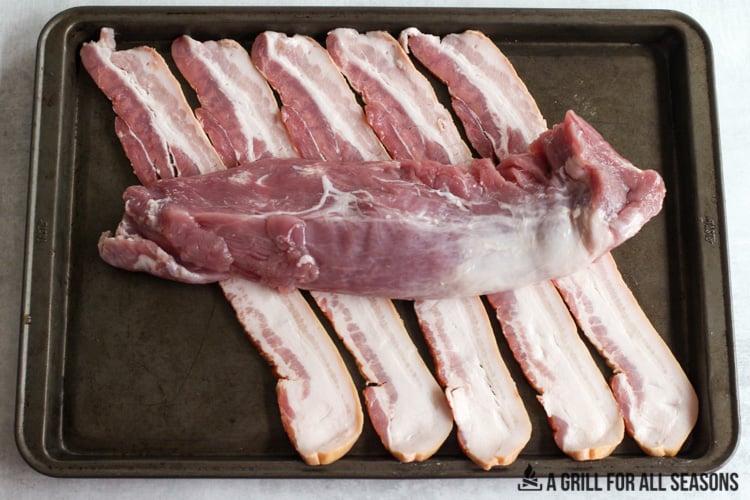 Bacon - You will use about five to six strips of bacon depending on how big your pork tenderloin is. If you are like me and struggle to make a nice bacon weave, just wrapping the bacon is fine. If you are having trouble with it falling off, using a little butcher twine can help. Out of bacon? Check out our Traeger pork tenderloin.

Pork Tenderloin - Ideally you want a thick one. Whenever you smoke pork tenderloin, you want to allow time for the smoke flavor to permeate the meat, but not at the cost of drying out the pork. Getting a thicker tenderloin will give you more time to smoke it. Most tenderloins are close to 1 lb, if you can find one closer to 1.5 lbs that will work well and give you a little longer time for smoke absorption.

This is fairly simple. You don't even need any seasoning as the salty bacon grease flavors the pork tenderloin.

Step 1: Prepare the pork. Wrap the pork tenderloin in bacon. You can weave the bacon or just wrap it up on an angle. If the pieces of bacon overlap slightly, they will stick to each other a little to keep the wrap intact as it cooks. I would wrap the tenderloin on a baking sheet. Once it is wrapped, cover the pork and baking sheet with plastic wrap and place it in the refrigerator for at least 20 minutes. The meat absorbs smoke better when it is cold, this will help the pork to take on more smoke flavor. It also helps to firm the bacon up to hold in place. 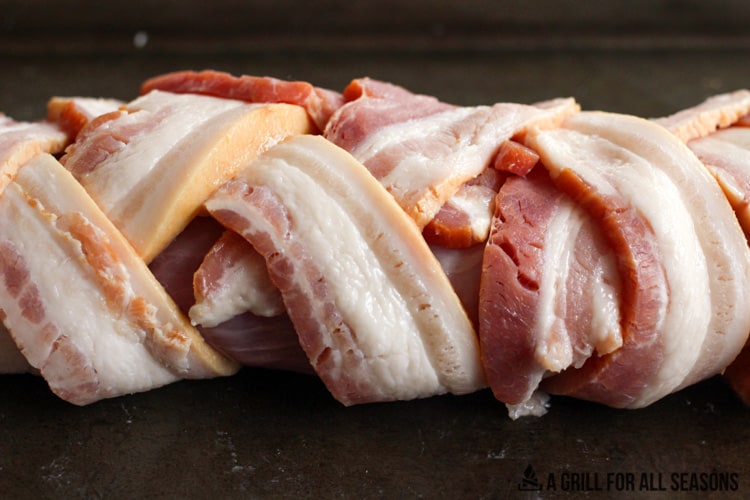 Step 2: Smoke the pork. After the pork has sat in the refrigerator for at least 20 minutes, take the pork off the cooking sheet and place it directly on the grate in the preheated smoker. Smoke the tenderloin at 185° for approximately 45 minutes or until the internal temperature reaches 130°F. You then have a choice of how you want to finish it. You will want to have a good meat thermometer to monitor the internal temperature.

Step 3: Finishing the pork. I recommend doing a revere sear. The benefit is that it will finish cooking the pork to your desired doneness while at the same time make create crispy bacon. 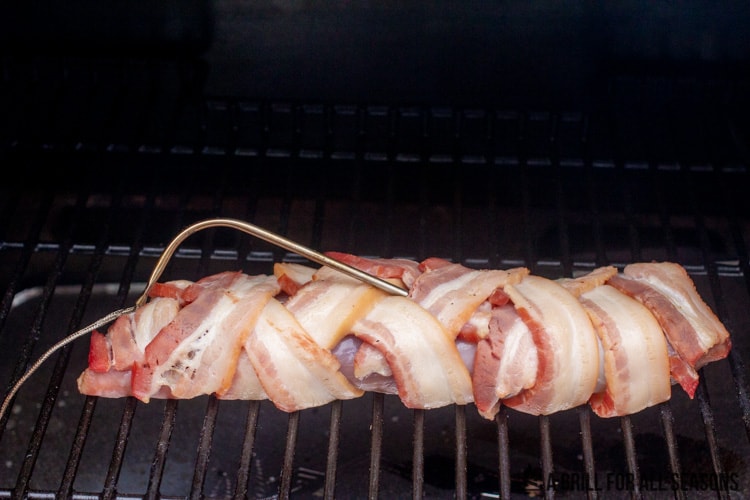 Smoking the pork tenderloin at 185°F is not going to crisp the bacon or give you a crunchy seared texture on the outside. I recommend reverse searing. There are a few ways to do this.

I was done reverse searing when the internal temperature on the pork tenderloin reached 145°F. I removed it from heat and let it rest for about five minutes before I sliced and served it. Some people are nervous to consume pork under 160°F. I always feel that it gets dry at that point. I prefer a slightly pink center in my pork. Just cook the pork to your preferred ideal temperature.

What temp do you smoke bacon wrapped pork tenderloin?

The longer the better if you are trying to get that smoked flavor to really develop. The factors that go into determining how long to smoke are the temperature you are smoking at and how thick the tenderloin is. I wanted at least 30 to 60 minutes to smoke the meat. I know I can hold a steady 185°F on my smoker. My hope was that I could bring the internal temperature to 130°F in about that time frame. I wanted to smoke it to a low internal temp because I wanted to finish the tenderloin with a reverse sear.

A couple of tips

You don't need a barbecue rub or bbq sauce because the bacon has kept it juicy the whole time. If you wanted a little glaze to smear on the plate for fancy presentation, then I would recommend a brown sugar bourbon or maple syrup-based glaze. If you would like to apply a rub apply it to the pork loin before adding the bacon. Our favorite simple rub is just equal parts of smoked paprika, black pepper, kosher salt, onion powder, and garlic powder.

When you slice the pork be sure to use a sharp knife and remember, the thicker the slice, the better the bacon will stay wrapped around it for a nice presentation. Serve it with your favorite sides and enjoy.

I used my Traeger grill with this smoke. I used the hickory pellets. If you have a charcoal smoker, using hickory wood chunks or wood chips will do nicely as well.

For the ultimate pork lovers out there make sure to try our Smoked Pork Belly. 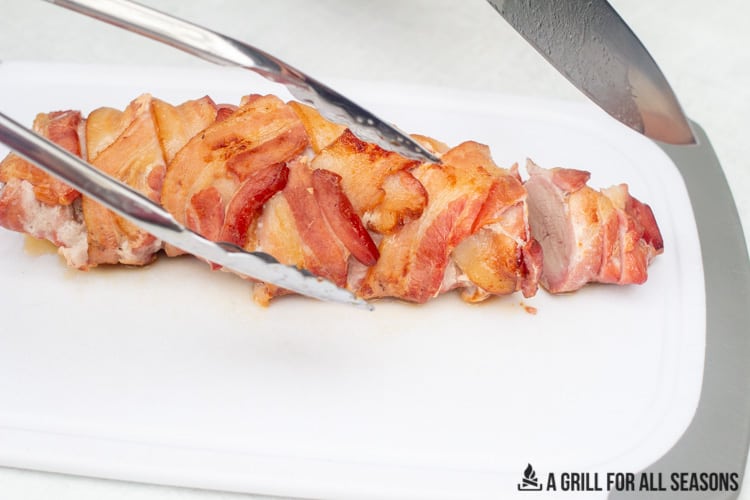 You can easily serve this with just a side of sauteed spinach and garlic if you are going for low carb or keto. If you are looking for more of a traditional meat and potato meal, here are a few of my favorites.

And follow it up with a delicious dessert. Try either Apple and Cherry Crumble or Grilled Peach and Mascarpone Ice Cream.

For a fun variation try this Smoked Beef Tenderloin! 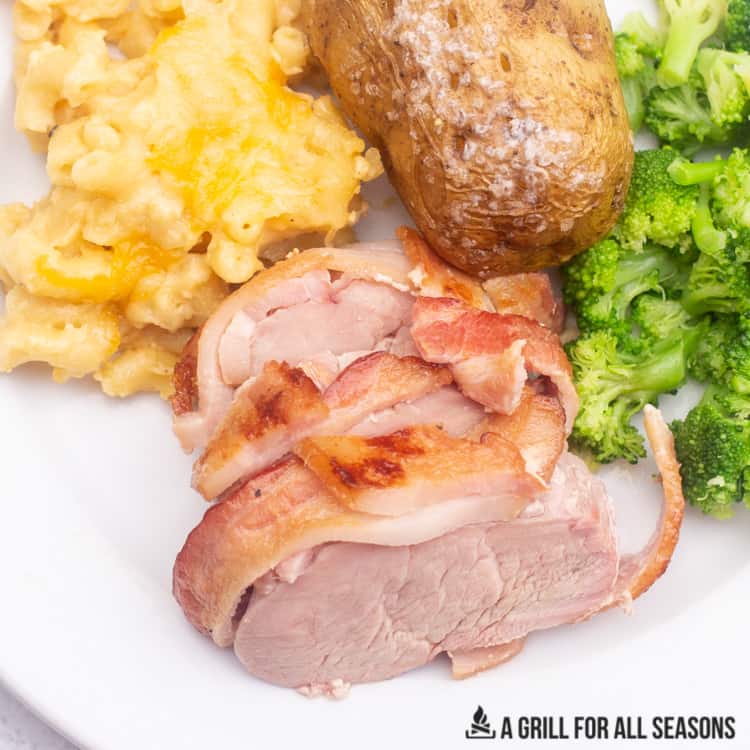